In Another Sign of Retail Recovery, Announced Store Closures See a Drastic Slowdown

One of the biggest surprises for the retail market in 2021 has been the drastic slowdown in announced store closings. Following a record-setting year in 2020, many believed the distress and dislocation of traditional shopping patterns caused by the pandemic would result in another year of an elevated number of stores shutting their doors.

However, as the number of new COVID-19 cases has fallen and retail operations have begun returning to more normal levels, retailers have announced plans to close just 25 million square feet of space since the start of 2021.

If the current pace continues, retailers would announce plans to close only about 42 million square feet of store space this year, the lowest annual total in more than a decade. While it is possible that store closure announcements will ramp up in the second half of the year, most signs are pointing to a strong recovery for the retail market. 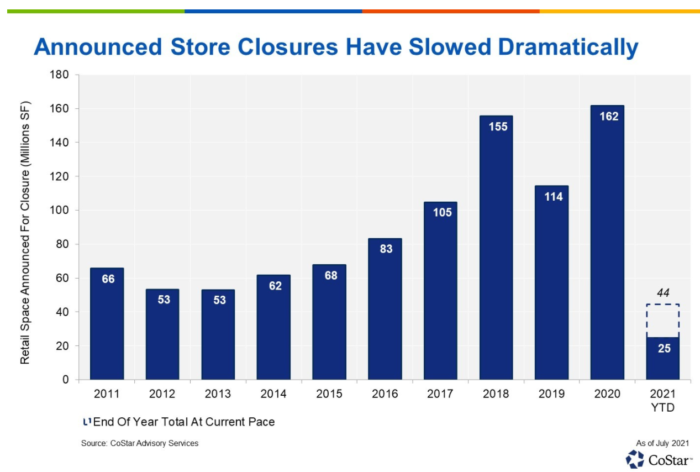 As a reflection of the current sentiment and future expectations of retail companies, announced store closures can be a leading indicator of distress for the retail commercial real estate market. These announcements tend to skew toward major retailers with multiple store locations, which generally reflect the greater retail market trend but do not fully account for the actual amount of square feet set to close.

The recent slowdown in announced store closures may partially reflect the forced acceleration of closures in 2020. Even if the current slow pace of 2021 continues, the 205 million square feet of closures announced since 2020 would be a significant amount of vacant space for the market to handle. The cumulative net absorption, or the difference between move-ins and move-outs, for the U.S. retail market in the three years prior to the pandemic was just 187 million square feet.

However, the limited number of announced store closures thus far through 2021 may also be a sign that many retailers have right-sized their footprints in recent years and suggests they may be content with their current store portfolios for the near term.

In fact, not only have announced store closures dramatically slowed, announced store openings have accelerated. As of about midyear 2021, announced openings are on pace to exceed announced closures by the end of 2021, which would be the first time this has occurred since 2014.

A pull-back in announced store shutdowns is much needed for the retail sector, and most trends in the market suggest store closure announcements will remain low this year. Retail leasing is recovering, especially in hard-hit urban business districts. This should continue as tourism rebounds and workers return to the office.

Despite the pandemic-induced shift to online shopping, in-store sales recovered quickly and have performed well. In-store sales were 15.9% above pre-pandemic levels as of June, even though e-commerce sales accelerated to account for 13.6% of retail sales in the first quarter of 2021, up from 11.4% a year prior.

Stimulus payments and an elevated savings rate for more than a year have put more cash into the pockets of consumers driving demand for retail goods. Some of the retail sectors that have benefited the most are sporting goods, building materials and supplies, furniture and home furnishings, food and beverage, and healthcare and personal care stores.

Retail and recreation mobility, tracked by Google, has also recovered in recent months as the vaccine has become more widely distributed and states have lifted restrictions on retail operations. Visits were nearly fully recovered by the start of July, a significant improvement from the nine-month low of 28% below baseline levels last February. Some states are now above pre-pandemic levels, including South Carolina, Minnesota, Tennessee, Michigan, Utah and Ohio. Other states still have ground to make up including Hawaii, California, New York and Massachusetts.

Consumer sentiment, which reflects how consumers feel about their current financial health, remains at a depressed level but has been trending up since the initial shock of the pandemic. After the longest economic expansion in history, the consumer sentiment index was exceptionally high. As of June, it was back around levels seen during 2013 and 2014, but still 15% below pre-pandemic levels. As the economy and employment recover, consumer sentiment should continue to climb, further driving consumer spending at retail locations.

The services sector, which includes experiential retail such as restaurants, movie theaters and fitness centers, is also showing renewed signs of life. After social-distancing and lockdown orders severely affected these businesses, there have been encouraging signs of recovery as evidenced by personal consumption of services nearly sitting even with February 2020’s level. Restaurant reservation totals, tracked by OpenTable, have returned to pre-pandemic levels, and while movie box office numbers are still relatively low, recent theatrical releases have garnered encouraging ticket sales. 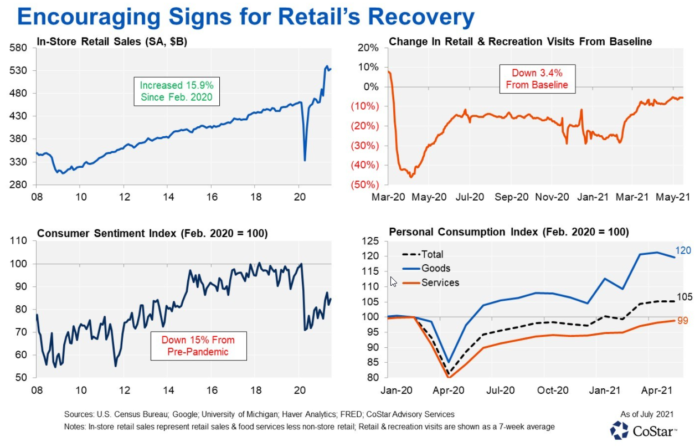 Despite these positive trends, some retail headwinds remain. Over the long term, investors will still have to navigate an overbuilt retail market that requires the rationalization of up to 1 billion square feet, including demolition, repurposing or rent rollbacks to return the market to healthy levels of sales productivity.

Another obstacle that has popped up recently is a shortage of retail workers. Hiring employees has been challenging for many retailers looking to return to normal levels of operation as well as retailers fortunate enough to be adding new locations. While this may slow the recovery in retail leasing in the near term, it should be more of a transitory challenge.

While both short- and long-term challenges remain, the retail market is in the midst of a strong recovery. Tracking signs of recovery, as well as understanding existing and future obstacles, will help owners and investors navigate the evolving retail market.